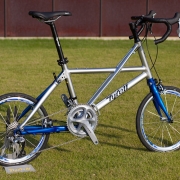 At the end of the year Tyrell launches the limited FX Blue Edition. Based on the regular FX, the Blue Edition features a unique colour combination of silver chrome and shiny blue details – including the front fork, parts of the rear fork and details of the AM-3 rims. The special colour scheme is extremely elaborate, so there will be only a few copies of this first Special Edition.

The pre-orders run until the end of December 2018, as soon as the planned number of pre-orders has been received, they will be produced and delivered. So if you’re interested, please let us know early, there won’t be a second production series!

The technical specifications are largely the same as for the FX. Only the Blue Edition gets a Shimano 105 group instead of the Shimano Tiagra. The Tyrell FX Blue Edition is available with a drop bar handlebar as well as a flat bar.

Want to join the discussion?
Feel free to contribute!

Overview for all Tyrell models